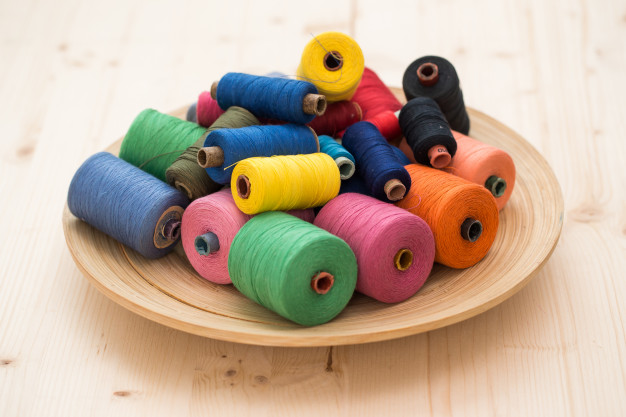 So, people wore clothes back in the days, right? I mean, no matter how archaic and outdated they may seem, people were still clothed centuries ago. Now that makes me wonder how long the sewing thread has been in existence, do you wonder too? From our undergarments all the way to the couches we sit on, the thread is a part and parcel of us, so I’d say it has been in existence for as long as humans walked on legs.

WHAT IS THE SEWING THREAD

The sewing thread comprises two or more ply of yarn, twisted together to form a thick or thin strand (depending on how many were twisted together) that is used to sew. It is made from materials such as raw cotton, linen, silk, jute, wool, etc. the thread is basically used to sew fabrics or other objects together.

HISTORY OF THE SEWING THREAD

In the past, sewing thread was made from animal hides which were cut into thin strands. The Egyptians were well known in making thread out of pet animal’s hair and plant fibre and wool. Change, they say, is a constant thing in life and this was not an exception as soon, civilization brought about modernized ways of making the thread. In 1730, cotton thread was first spun in England by parts of a machine, collectively. Thanks to the British Colonies because from then on, it spread fast like a wildfire all over the world.

Ancient people and tribes knew just which plant or tree produced the best thread, plants such as honeysuckle, cactus and reed. The popularly known old man’s beard in Europe was used to make twine and it was strong and thick. While in Costa Rica and the Philipines, hemp was grown into a fibre, thread, rope and then paper. When you peel the yucca plant of the native Americans, a thread that can be used to sew comes out and our ancestors and forefathers of old knew all these gifts of nature pretty well. The Babylonians and Assyrians invented embroidery between 1600 BC t0 1100 BC, and by 350 BC, the queen in china made history by spinning glossy silk thread out of silk cocoon. The beautiful and luxurious silk was first discovered by the Chinese and Japanese being spun into thread and then as a cloth.

Threads are categorized into two; natural threads and synthetic threads. Cotton thread, silk thread, are examples of natural threads while polyester threads are synthetic threads. Specialized glands, right below the mouth of the silkworm generates the silk thread, while cotton is picked from cotton plants, compressed into bales and cleaned at the mill as the bale may contain seeds, specks of dirt, and other impurities. Crude oil is broken down into several components used to produce materials such as thread and plastic. They undergo chemical reactions and acids are added, It is then heated up and the elements align to form long molecules called polyester, it is then cooled with water and cut into chips which are shipped from the refinery to thread manufactures to be spun.

Read more on the history of sewing thread here

Now you know! If you liked this excerpt on the sewing thread, then you should read our article on cotton and silk.